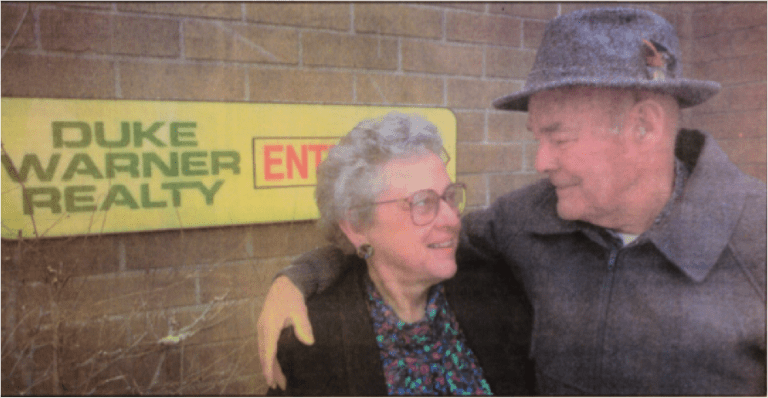 From humble beginnings, Duke Warner Realty has grown into a Central Oregon real estate icon with many of the best Bend, Oregon Realtors offering prime land for sale. Their story begins with Kitty Warner, who was recently honored for her 46 years of service, as she finished her career as a real estate broker. Kitty earned her broker’s license in 1958 (to the chagrin of the test administrator, who opined that “a woman’s place is in the kitchen”) and has stayed the course through the downs of four recessions and the upward growth of Central Oregon.

In 1962, Kitty’s husband, Wayne Korish, passed away and Kitty moved from Camp Sherman, where she had grown up, into the small town of Bend. It was there that she met a fellow Realtor® named Duke Warner, who was to become her husband and take on the role of father to Kitty’s six children. A few years later Kitty and Duke, as a husband and wife team, rented a space so close to Mirror Pond that they used to joke that, if they left the door open, the geese would walk right in! Soon after, they moved to a larger space on 3rd and Seward and added more Realtors to their Bend, Oregon office. When a restaurant next door closed, they moved into that even larger space. The small company of Duke Warner Realty was growing.

The 70’s-early 80’s were tough years for Bend, Oregon Realtors and real estate as recession gripped the nation. During the ensuing economic recovery, however, Duke Warner began the purchase of their current location at 1033 NW Newport.

Kitty’s fourth child, and current Duke Warner Principal Broker Kris Warner, recalls, “I saw my parents going through those tough times and swore I wouldn’t get into Bend’s real estate. Mom and dad used to drop us kids off at the Tower Theater to watch a matinee while they did business—back in those days, everybody knew one another and people kept an eye on us.” Kris adds that, “Dad used to help people out by accepting trade from sellers who didn’t have the cash to pay him commission.”

Kris did later become one of Duke Warner’s Realtors® and Principal Broker in the office. “I realized that real estate can be a highly-satisfying career with the opportunity to help people realize their life goals. We have successfully navigated the ups and downs of the economy by running a solid, honest business.”

Duke passed away in June, 2005, leaving his family to continue the family business and keep moving forward. In 2013, the company paid off its Bend real estate office building and now owns its business properties free and clear, prompting plans for a “Mortgage-Burning Party.”As Duke Warner moves toward their 2017 50-year anniversary, the company is going strong and continuing to add real estate brokers, in addition to working on plans that will keep the company on the cutting edge, with a fresh branding message.

Duke and Kitty Warner set the tone for this successful local company of Bend Realtors with their ethic of hard work and down-to-earth personalities. Kris tells a story about when his mother, Kitty, was honored at an awards banquet.

“Mom has never liked to be center stage, so when it came time to go up to the podium and accept the award, dad put on a wig, jumped up there and accepted the award in her place.”

Kris Warner says, “Duke Warner Realty, much like Central Oregon itself, has a long, rich history, but is always growing into new areas, redefining itself and embracing the future.”

Our Bend real estate office is home base for Duke Warner Realty. We recently held a “mortgage burning” event to celebrate our full ownership of the Bend campus. This state-of-the-art facility is the heart of our Central Oregon Real Estate company. Our campus houses dozens of real estate professionals. We support our brokers with modern and interactive office space, advertising cost share, cutting-edge digital tools, and a family-like team environment.

We are proud of our roots as a Central Oregon real estate company in Bend & now Dayville. Our Dayville real estate office, located in Eastern Oregon, allows us to bring our high level of service and professionalism to the right hand side of our beautiful state. Our Dayville team is ready to serve you in Oregon’s “Backcountry.” If you enjoy wide-open spaces, a lack of crowds, and hometown settings, our Central Oregon Real Estate company can help you find your ideal home, ranch, or property!